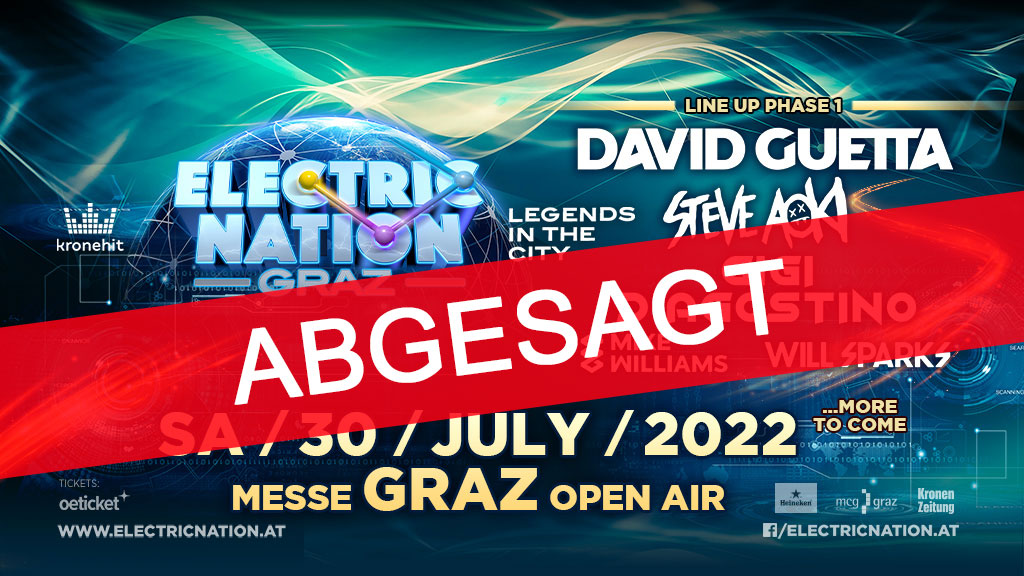 Concert postponement due to Covid-19

Due to the current global situation, we have to postpone Kronehit Electric Nation 2021 again with a heavy heart by one year to 2022. Events of this size require not only absolute planning security but also intensive preparation time, but the latter is not given due to the short-term relaxation and the resulting short lead time. Due to the very different situation and measures around the world, it is not possible for us to let the festival take place as originally planned.

For this reason, and above all to give you an unrestricted festival experience with all of the artists announced so far, this step is unfortunately inevitable for us.

At the same time, we are pleased to announce that we have already succeeded in finding a SUBSTITUTE DATE for this event: the Kronehit Electric Nation Graz will now take place on July 30th, 2022 at the Messe Graz Open Air site.

All tickets already purchased will of course remain valid for the alternative date of the festival.

It will definitely be the OPEN AIR PARTY of 2022 in Graz, when DJ SUPERSTAR DAVID GUETTA, STEVE AOKI, WILL SPARKS and MIKE WILLIAMS will provide an unforgettable EDM spectacle at the Graz Open Air Exhibition Center. GIGI D’AGOSTINO is NEW there – because when the real legends come to Graz, the Italian superstar should definitely not be missing. With Legends in the City, the KRONEHIT ELECTRIC NATION brings true legends from the music scene to the largest open-air party of the year on July 30, 2022 in Graz and visitors can already look forward to a superlative music event.

DAVID GUETTA is coming to Graz for his only Austrian appearance & will make the turntables glow at the Kronehit Electric Nation with his well-known, gripping and large-format live shows with exciting visuals and phenomenal effects.

STEVE AOKI, legendary for his cake fights and champagne showers, is the

To really heat up the audience with his fat beats.

GIGI D’AGOSTINO, the Italian superstar will set the mood in Graz with his world-famous hits like “L’Amour Toujours” or “The Riddle”.

Also there is the likeable Australian WILL SPARKS, a guarantor for energetic shows. The ingenious DJ and producer is known for his first-class Melbourne sound and will bring the Messe Graz Open Air area to a boil with his bounce hits. MIKE WILLIAMS, DJ and producer from the Netherlands, will also ensure the best party atmosphere with his dance hits and re-mixes.

As with the last Electric Nation Graz, there will also be a mega-stage in 2022, which can hardly be surpassed in terms of design and technology. The design is still a well-kept secret, but this much can already be revealed: It will be phenomenal.